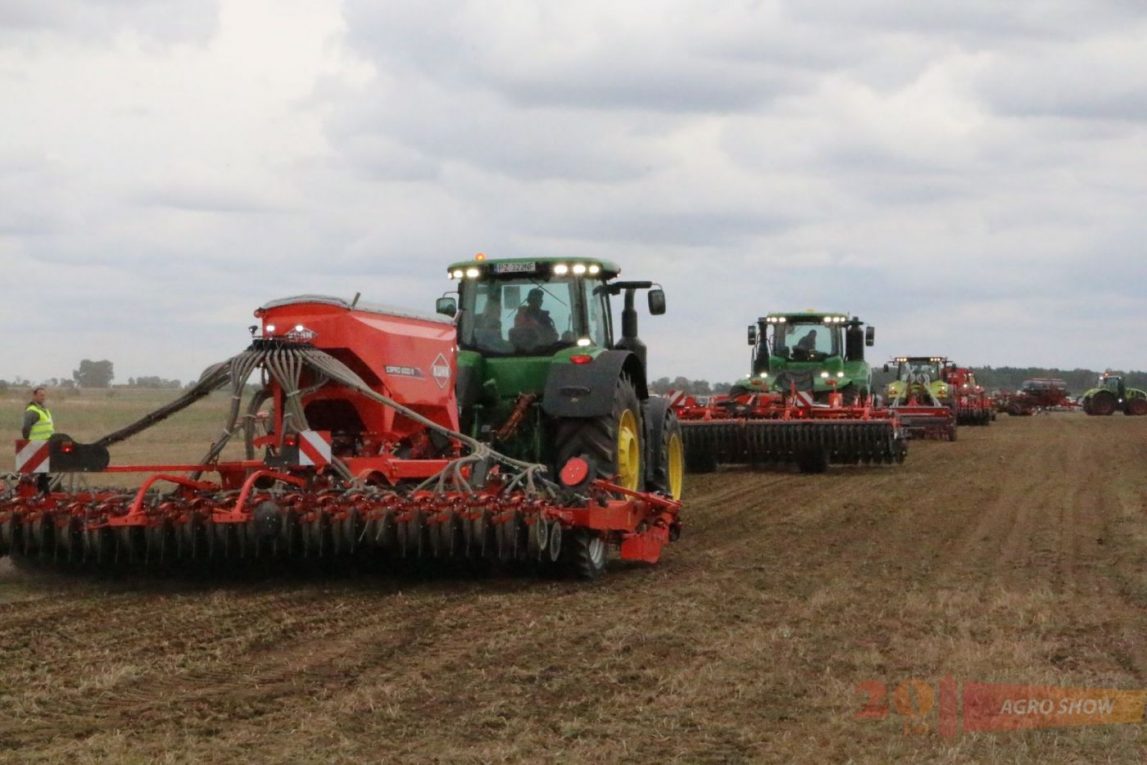 After machine presentations during the Exhibition Agro Show 2018

The 20th jubilee anniversary exhibition Agro Show in Bednary will be associated with a new form of machine presentations. As it is generally known, the initiators behind the idea of the Agro Show Exhibition – the Polish Chamber of Commerce for Agricultural Machines and Facilities – assumed that presentations of machines at work would form its important part. During 20 years, the formula of these presentations was changed several times. The agricultural technique also changed. However, the presentations always concerned the latest trends in design of agricultural tractors and machines, and the new technologies used in agricultural production.

The new form of presentations was developed in cooperation with interested exhibitors, members of the Chamber, who, together with the Management Board, decided that during the exhibition AGRO SHOW 2018 in Bednary, the machine presentations would be held in two blocks: precision agriculture and corn sowing technique in the simplified system.

Precision agriculture brings specific benefits, and this encourages the increasing number of farmers to invest in these solutions. However, the agricultural technique develops fast, and new models of machines are launched to the market, increasingly automated and computerised, working with data collected in a real time, which we start to consider as belonging to Farming 4.0. Such solutions are specific for modern fertiliser spreaders, which spread fertilisers in a field using a map of variable fertilisation, with a dynamic adjustment of an operating width. These assumptions formed a basis for a presentation of 6 spreaders of mineral fertilisers. The machines shown during the presentations by manufactures or their representatives included: Amazone ZA-TS, Bogballe M35W Plus, Sulky X50 Econov Isobus (Korbanek), Rauch AXIS-H 30.2 EMC+W (Kuhn Maszyny Rolnicze), Kverneland Exacta TL GEOSPREAD, and Unia MXL 1600 Premium. Changes in the fertiliser dose and spreading width were observed by the presentation audience on two large screens installed in the presentation field. During the first run the spreaders also worked with a border spreading system switched on.

The second component of the spreaders presentation focused on data management systems. Two systems were presented, from John Deere and Claas. John Deere presented new functionalities of the MachineSync system, which, together with the telematic system JDLink, can be used by two spreaders for sharing a map of fertiliser spreading in a field, or sending between them a line for piloting the units. During the presentation, two tractors with the John Deere Commandenter 4600 displayer, working together with Kverneland and Rauch spreaders, presented this system while moving towards and seeing each other. This system ensures that at a spot where fertiliser was already spread, another machine will switch its spreading sections off. Data is sent between the displays using the cellular data transmission technology. Machines sharing the spreading map must subscribe JDLink Connect and be in the same account of a customer organisation in the Operating Centre MyJohnDeere. This solution can also be used when other machines, e.g., sprayers, work in the same field.

Claas presented its products for precision agriculture using the tractor Claas Arion 660 CMATIC as an example. Its standard features included an automatic run system with RTK NET precision based on an operating terminal Claas S10 ISOBUS, and a telemetric Claas Telematics system. The tractor worked with the Rauch AXIS H 30.2 EMC spreader. The terminal functions enable saving of all data for the tractor operation together with data of the spreader, with GPS positions assigned to them, as well as automatic closing of spreader sections (and other machines) and an automatic driving of the unit into the next technological path. After the presentation, all data sent to the Claas Telematics server during the presentations could be viewed at the Class stand.

In the second block, concerning sowing of corn in the simplified system, various technical and technological solutions related to corn sowing in the no-till system were presented. The technologies for simplified cultivation and sowing are increasingly often used by farmers. A relevant range of products offered in the market by domestic manufacturers also expands. During the presentations, machines sowing corn by three methods: direct, strip, or mulch sowing, were presented.

An additional attraction during the presentations were tractors working with cultivating machines.

Are you interested in booking a stand? Do you have any questions about the exhibition?

SET UP A NOTIFICATION
OF AN UPCOMING
EXHIBITION DATE

Set up a notification

Notification of the deadline of accepting applications for the exhibition

Notification of an upcoming exhibition date

Successfully subscribed to the newsletter